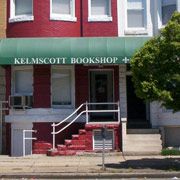 Fran Durako, owner
Fran, a bibliophile who grew up in Indiana, was formerly the chief information officer for a large DC law firm. She purchased the Kelmscott Bookshop in 2003. An avid collector of books about the Pre-Raphaelites, William Morris, and private presses, it is quite appropriate that she bought a shop named after Morris's home and press. She, her husband, Steve, and their 2 cats (Jake and Arthur) reside in Silver Spring.

Susannah Horrom, manager
In addition to managing the shop, Susannah is responsible for designing our advertisements and catalogs. She also makes our booths at Antiquarian book fairs the standouts of the show. In her spare time she binds hand-made journals, rides horses, makes costumes for the Baltimore Rock Opera Society (BROS), and pursues other artistic endeavors. She, her husband, son, and beloved cats Belzoni, Rossetti, Gwen (and now Sinclair) reside in Towson. All of her kitties were either rescued alley cats from the alley next to the shop OR they were born at the Kelmscott Bookshop! She has a studio art degree from St. Mary's College of Maryland with a concentration in photography.

Pierre, former security
Pierre was rescued from the alley next to our shop several years ago. He is white with a black spot on his head (resembling a small beret) and a striped raccoon tail. He enjoys eating, tripping customers, stealing pencils, and learning French. He's a little skittish and is not the smartest cat, but he warms up quickly to anyone opening a can of cat food. Due to our irregular hours, Pierre is currently being fostered by our prior assistant, Moira. Pierre has some health issues including a history of diabetes; although, he is currently in remission and does not require insulin. Please contact us if you are interested in providing a permanent home for Pierre.

Upton Sinclair, former security
Sinclair was discovered wandering loose in our ex-assistant Moira's apartment building with no one willing to claim him. A majestic orange kitty with bright green eyes, he is quick to purr and always seems ready for petting. He has claimed the front desk and greets all customers when they're ready to check out. Due to our irregular hours, Sinclair now lives exclusively at home with our manager, Susannah - and is loving his new life despite occasional squabbles with her other kitties.

Madeline, retired security
Madeline was adopted from the SPCA soon after Fran purchased the bookshop. She quickly adjusted to her new home and became the perfect shop cat - always purring and ready to crawl into an available lap. Sadly, after struggling with diabetes and later cancer, Madeline recently passed on. She is missed greatly by everyone who knew her.